The above tweets (and meme) were published as part of a larger social problem of what to do about the proliferation of misinformation.  These tweets have many embedded and interrelated arguments. I’m going to focus on just one of these arguments, namely, that “censorship undermines media trust.” There is an obvious truth to this argument: authoritarian censorship undermines trust in the media. But, there is a different implicit argument: unfettered free-speech will promote trust in the media. What follows is my attempt to look for evidence for this argument.

There have been calls for platforms like Spotify and Substack to reign in COVID related misinformation. The issue of whether tech companies should administer editorial oversight or content regulation has become yet another partisan issue. But again, this is in the broader context of an incredible explosion in the capacity to reach an audience of millions with little to no expertise or editorial oversight. Since the invention of the printing press in the 1400s and the evolution of newspapers, magazines, radio, and TV, there has generally been editorial oversight. People with educational qualification, journalistic experience and/or ethical responsibilities, or otherwise, have regulated the extent to which ideas could reach large audiences. This new era of new media content is a historically unprecedented inflection point in our cultural evolution, where an audience of millions is only a few viral stories away. I mention this context to immediately note that our perception of media and its relationship to free-speech is likely far from straight forward. 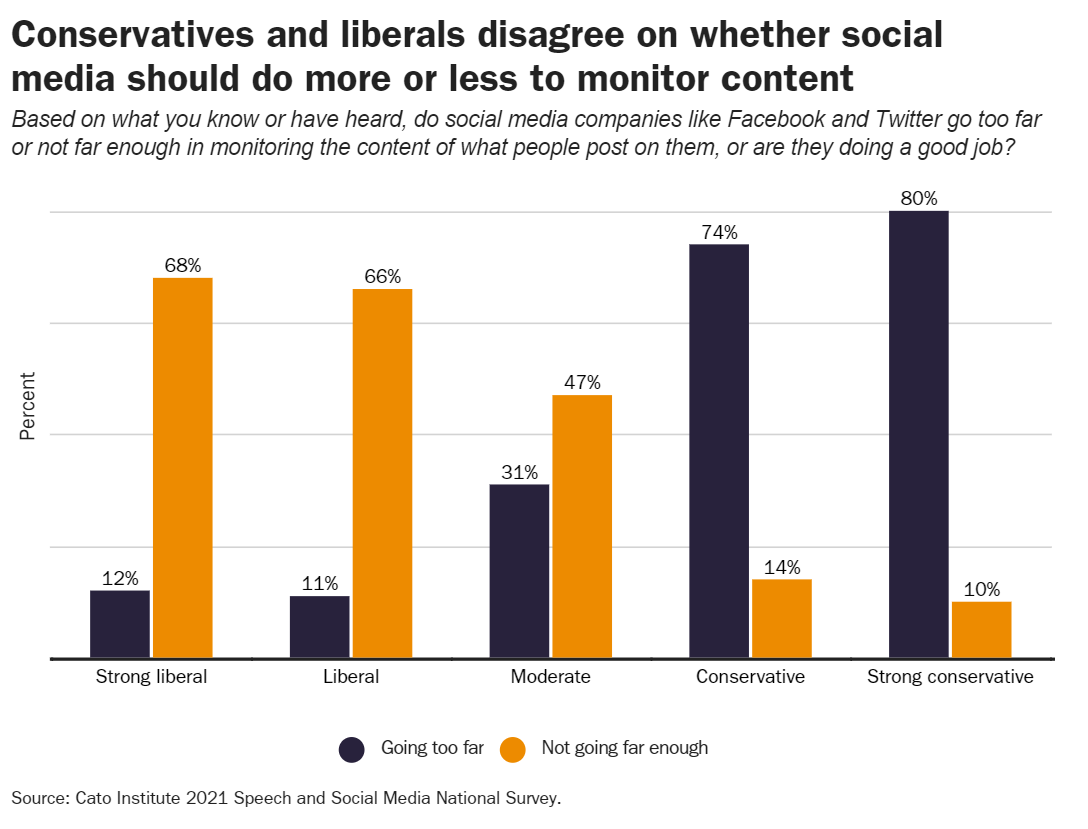 Nevertheless, a simple straightforward idea like “unfettered free-speech predicts trust in media” can be imperfectly investigated using a straightforward analysis. Upon encountering this argument, I went looking for data that would speak to it’s veracity. I looked for data on how much people trust the media in a variety of countries and then looked for data that might “explain” the cross country differences in media trust. I should make a pedantic note that I cannot draw causal conclusions from these data, so I use “explain” in the correlational sense. I’m just looking at what factors are associated with cross country differences in media trust. If the causal narrative that “unfettered free-speech predicts media trust” is true, I would expect to find that factors related to free-speech would predict media trust. I found data on free speech preferences, human freedom, press freedom, polarization, inequality, and anti-vax conspiracy beliefs. Below I describe all the data and then run a couple simple correlations. I also have provided all the data here.

As shown in the meme above, one relevant bit of data that is circulating on social media is a study purportedly showing that the US ranked dead last among 46 countries as having the least trustworthy media. This data comes from a report released by the Reuters institute for the Study of Journalism at Oxford. It surveys 92 thousand people in 46 countries. I want to see what other data explains the ranking of trust in news media.

Compared to other countries around the world, US citizens are the most supportive of free speech, according to a Pew Research analysis from 2016. Maybe countries with a lot of free-speech support would trust the news media more. 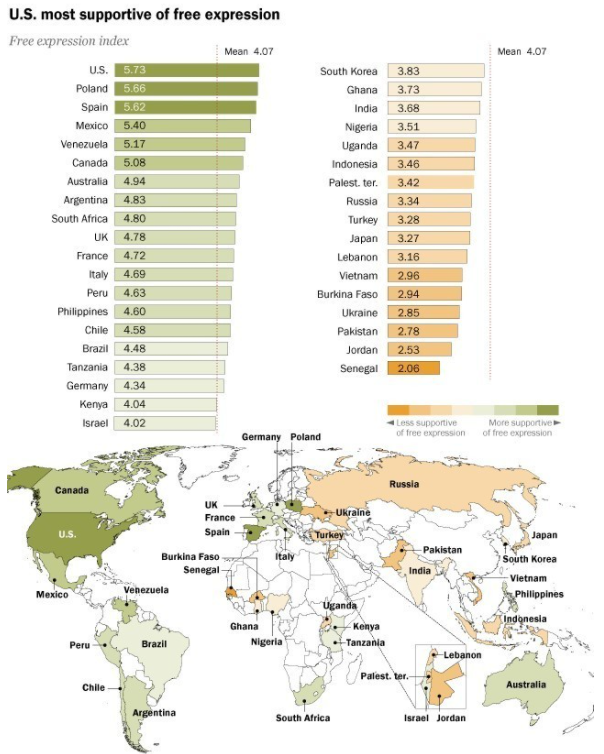 This level of support for free-speech reflects our fairly loose restrictions on free-speech. For example, unlike most other countries, the US lacks restrictions on hate speech. Of course, there isn’t a perfect correlation between free-speech support and actual free-speech as evidenced by the Polish government which has arrested LGBT activists, and people who insult monuments. Even in the US, there are obscenity laws that prevent the freedom to say certain words and display certain images on radio, TV, and newspapers.

Fortunately, there are other data sources to evaluate the degree to which we have free speech in the US relative to other countries.

Two think tanks, the libertarian Cato Institute and conservative and libertarian Fraser Institute produce an annual report on their global measure of “personal, civil, and economic freedom” which grades countries along 82 distinct indicators of “freedom.” Relevant to my investigation is their indexing of freedom of association, assembly and civil society, freedom of expression and information. They quantify these complex societal variables into 2 unique indexes: Personal freedom, and economic freedom. Both of which are combined to create a “human freedom” index. To state the obvious, these measures are certainly imperfect, but they are some relevant data points related to actual freedom people have in society, rather than just the stated preferences people have toward free speech. Maybe these measures will help us explain the degree to which people distrust the media. 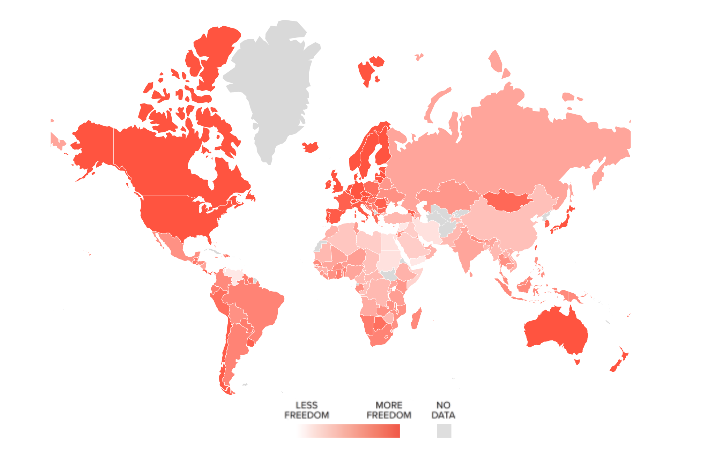 The French International NGO Reporters Without Borders has its own annual report on press freedom; the World Press Freedom Index. This index is designed to measure a country’s press freedom by evaluating seven criteria: media pluralism (if there are a variety of opinions represented), environmental and self-censorship, legislative frameworks, transparency, infrastructure, abuses, and media independence. Higher numbers indicate less freedom. They rely on the input of many experts to create this index. Surely where countries fall on the World Press Freedom Index would predict some of why people distrust the media. 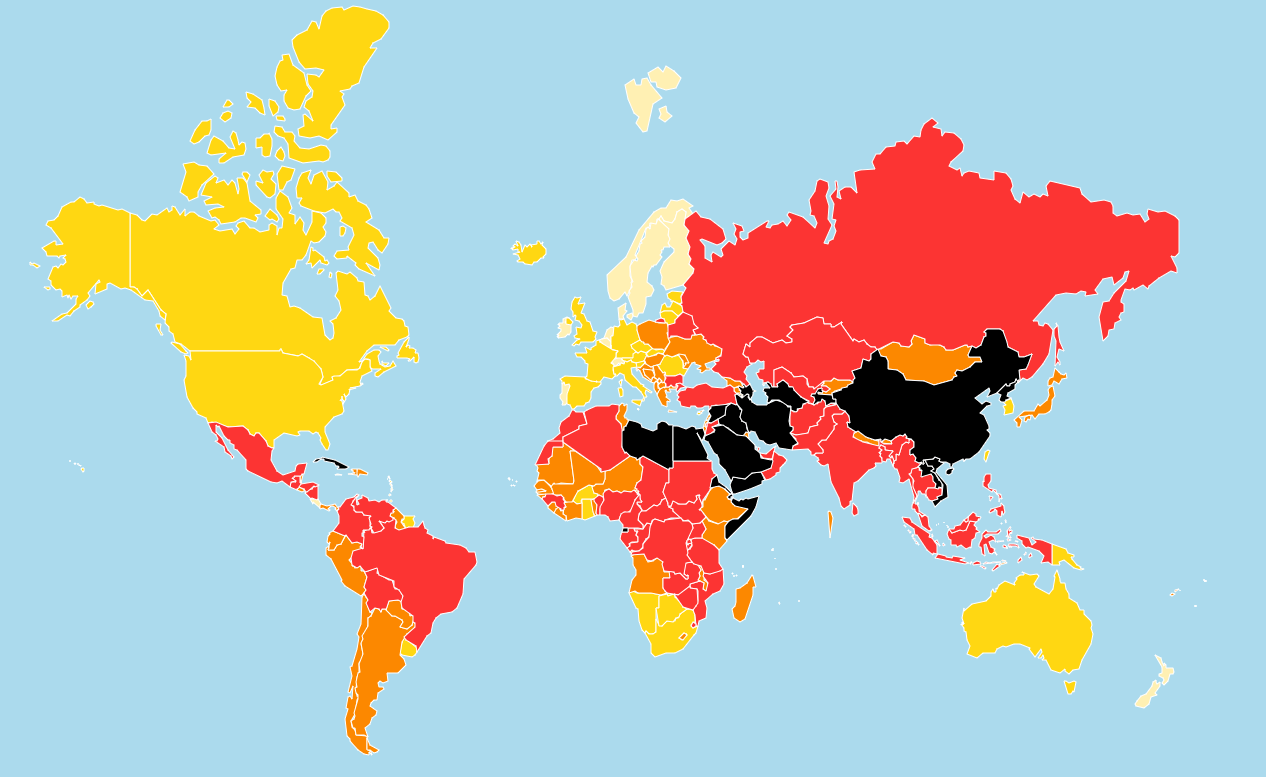 The UK based marketing research company Ipsos MORI evaluated the extent to which the world had grown more polarized across 27 countries in 2018. Specifically for my investigation, I looked at their data on whether participants thought that people in their countries were more (or less) divided than they were ten years ago, and a second question on whether they thought people were tolerant to those “with different backgrounds, cultures, or views.” I sought out polarization data because polarization is often cited as one of the most relevant factors related to media distrust by political scientists. Maybe this explains the media distrust we are seeing?

The GINI coefficient is a measure of economic inequality where higher values indicate greater economic inequality, such that the rich have a higher proportion of income relative to the rest of the society. I added this variable to my dataset to see if inequality is related to media distrust, as has been suggested in the literature on this topic.

YouGov and the Cambridge Globalism Project teamed up in 2020 to interview 22,000 people in 21 countries to estimate beliefs in conspiracy theories. I took data from a single question about the extent to which people believe that “harmful side effects of vaccines are hidden from the public.” Maybe this kind of misinformation is related to media distrust.

So, what story is there to tell with all of these data?

Let’s take a look at a simple correlation table among the variables we are using to relate to media distrust. Many of the relations make sense. For example, support for free-speech correlates well with personal freedom and more press freedom (remember low free_press = more freedom). The three indexes of freedom from Cato correlate well with the free-press index from Reporters Without Borders. These correlations are reassuring; the variables are relating to each other the way we would expect. On the other hand, surprisingly, support for freedom of speech is correlated to a perception of being more divided now than 10 years ago. 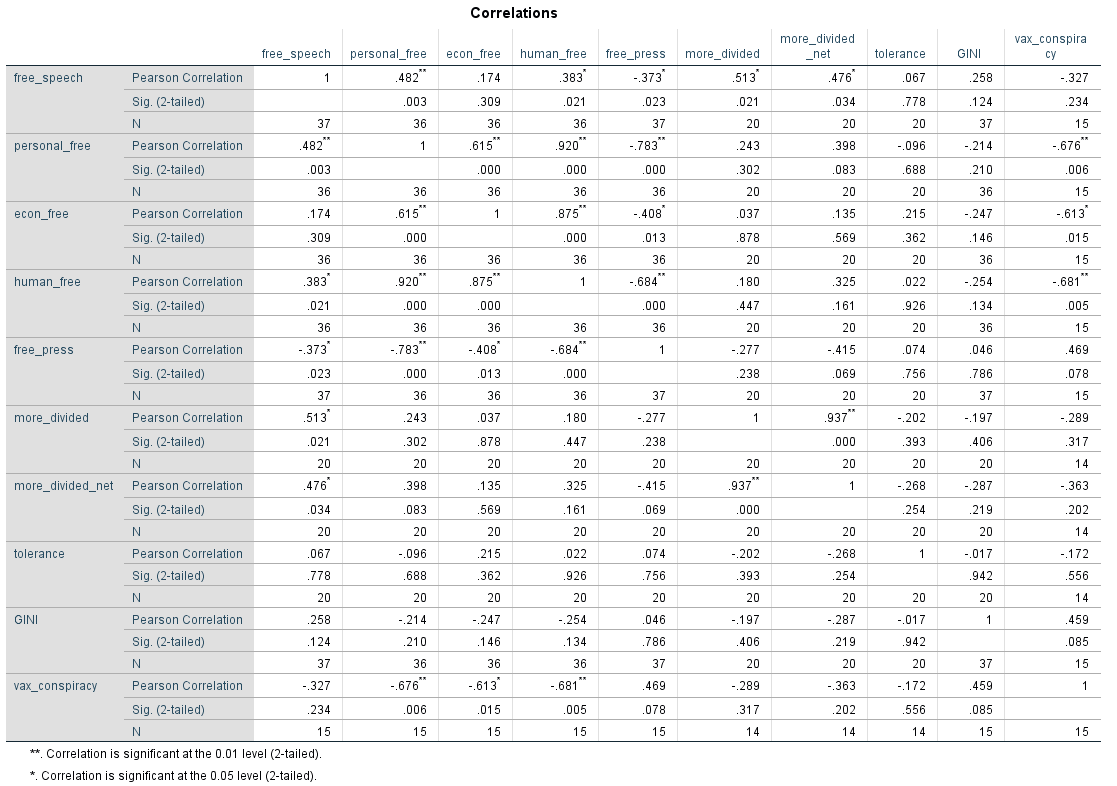 Importantly, these effects aren’t due to the US being an outlier, they aren’t meaningfully different when the US is removed.

So, how do these variables predict media distrust?

Well… they don’t. None of them even correlate with media distrust. To some extent this is probably related to the relatively small sample size, but the direction of the relationships are also backwards. Media distrust has a non-significant negative correlation with free-speech preferences, and free-speech freedoms. 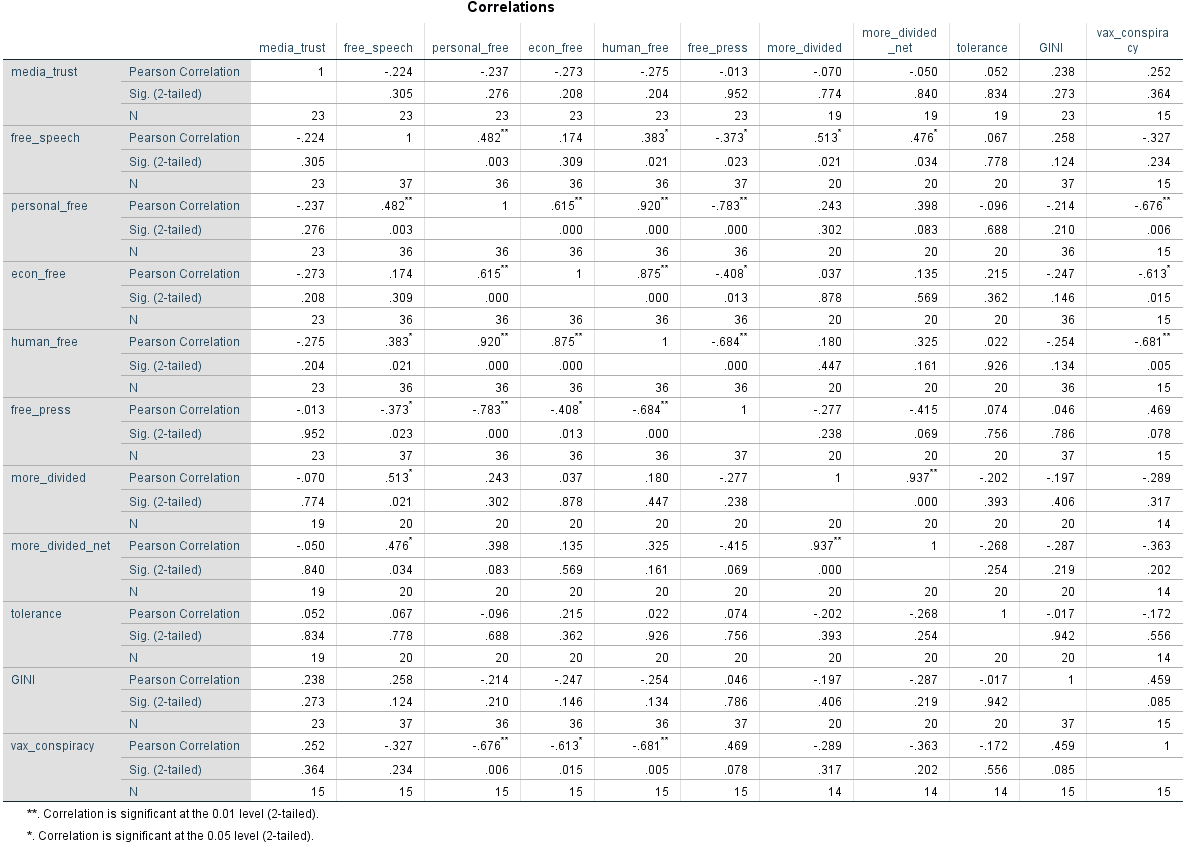 What conclusions can we draw from this collection of statistically non-significant findings? In some sense, it evidences my original point: This stuff is complicated and none of these variables are sufficiently capturing the dynamics that explain media distrust. Remember, the implicit argument is that “unmitigated free-speech promotes media trust.” But we looked at data representing the degree to which free-speech is mitigated and we looked at data representing media trust and found them to be uncorrelated. This doesn’t disprove anything, but it also doesn’t offer supporting evidence for an argument that is being proffered so vehemently. The fact that the non-significant correlations trend in the opposite direction is also quite interesting. Maybe countries that allow more unmitigated free-speech will have a more difficult time tamping down on misinformation that could damage public trust in media, government, and medicine during a global pandemic? Likely, there is a bunch of complex stuff going on all at once and simple narratives about what does and doesn’t undermine or promote media distrust are likely to be, well, oversimplifying. Clearly a more principled and extensive investigation is necessary to fully flesh out the associations here.

As stated in the beginning, surely authoritarian censorship will degrade media trust, but that is an extreme case. Authoritarian censorship isn’t really relevant to the state of free-speech in the democratic developed world. Instead we have a constantly evolving media ecosystem in which each country has negotiated a set of laws that protect free speech as one of many freedoms to consider. Would more strict rules, terms of service, or even laws regulating free-speech make people distrust the media more? Well, some countries that have more regulations have more trust in their media, not less. In the data I looked at, free-speech and media distrust seem fairly unrelated to one another, at least among democratic societies. Then again, maybe the US is a unique context where it would be particularly hard to reign in speech without exacerbating existing distrust. In the end we don’t know. But we should strive to not get overly attached to narratives stated with such certainty and without evidence.

Published by Science of social problems

View all posts by Science of social problems